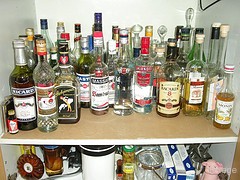 by hmboo under CC BY-ND

Every restaurant offers it, every movie flaunts it, every store carries it, every person has tried it – yes, alcohol is very common in today’s society and for this reason, it has become a topic of debate due to the great number of individuals who have a problem controlling how much they drink.

Still, many wonder, “Why?”- a lot of individuals do not even enjoy the taste of alcohol or the feeling of being out of control. NIH Studies have proven the detrimental effects of alcohol on both long and short term health. So, why some people become heavy binge drinkers?

To begin with, most people are not even aware of the actual reason that is motivating them to drink. They may have ideas or beliefs as to the issue, but in reality it is usually a reason that they are not aware of. There are many unconscious reasonings that commonly cause people to drink alcoholic beverages, even when they know it can be bad for their health.

If you ask a professional, “Why do people drink alcohol?” one of the first things they will tell you is that it is for mood regulation. Some people instinctively feel that they can use alcohol to escape from the state, stressful day or problem that they have, and enjoy temporarily a state that makes them feel better. Others drink to have more courage – courage to approach others, courage to say what they want to say.

The second reason is to let other people see them differently. People want to create a new identity; people who are shy may drink to become more outgoing, people with tomboy personalities may drink to show she can be “careless” like a man, men trying to impress women think that having some drinks will make them look cooler or more attractive. Whatever the identity they crave is, they have the goal to force others to see them in this new light.

Finally, some group of people using alcohol to prove something to themselves, or in their minds “to the world.” They may feel like they want to appear to be happier or more social. There have been individuals who said they were atheist and they enjoyed drinking to prove religions who didn’t approve of alcohol wrong.

You can even blame the increase of drinking on the media. They portray binge drinking as a fun, normal everyday occurrence. You can’t watch a television show without seeing commercials advertising for a beer or liquor company. No magazine is without similar advertisements either. These billion dollar companies want drinking to seem commonplace, so the consumers have less inhibitions about drinking more – it is a very dangerous pressure that we see getting worse and worse.

In conclusion, there are countless numbers of reasons you can use to answer the question, “Why Do Some People Drink Alcohol?” No matter what the reason is the fact remains the same that it is extremely dangerous; anyone who is struggling with an addiction of this sort needs to consult a professional (or alcoholism rehab center) so they can find the exact root cause of the issue, and subsequently work on fixing it.

Check also article on living with an alcoholic.