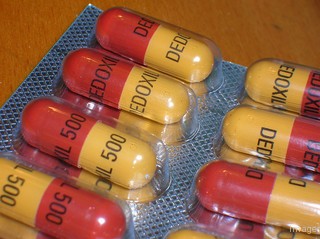 by rbrwr under CC BY-SA

Everyone at one time or another has had to take antibiotics for some reason. The first thing any doctor, general practitioner, nurse, or family member will say is, “Do not take your antibiotics with alcohol! It will cancel out the effect of them, make them ineffective!” However, is this age old advice true? Alcohol and antibiotics: is it dangerous to combine?

Some individuals think that this advice dates back to the 1950s, when penicillin began to be used for treatment for a variety of sexually transmitted diseases. At this time, doctors were worried that their patients would drink alcohol, have their inhibitions lowered, and the subsequent actions would undo the expensive treatment they were under with these new miraculous medications. So patients would be advised to keep away from it while being treated with antibiotics.

As studies later showed, in this scenario, people being treated for STDs were more likely to engage in sexual activity when under the influence of wine, whisky, beer, cider or vodka.

Alcohol with antibiotics are still recommended being avoided when taking a select few types of medications, i.e. Flagyl, Bactrim, and Simplotan. These particular types of antibiotics block one of the major ways that alcohol is metabolized out of the body. So when you drink while taking this type of medication, you will experience all of the awful side effects of drinking, such as fainting, vomiting, tiredness, dizziness, an upset stomach and flushed skin, with as little as one beer.

Most physicians will give you quite the lecture on these side effects, though, when prescribing these particular antibiotics. They are used for very specialized conditions such as intestinal worms or parasites from contaminated drinking water. However, for the majority of other antibiotics on the market, there is no evidence that proves that there is harm from a controlled alcohol intake.

There are still reasons not to drink excessive amounts of alcohol & antibiotics. The effects of alcohol are heightened, and if you are already feeling ill the nauseating and sedative effects of beer, red wine, vodka, whisky, cider or tequila are probably going to increase.

When your body is fighting an illness, it tries to raise a fever to slow the infection from spreading. However, when people drink beer, vodka, whisky, wine or cider, it dilates blood vessels which interfere with the human body’s defense mechanisms.

Your risk of dehydration increases as well because your kidneys are forced to lose more fluid due to the effects from the alcohol. Additionally, the muscle aches and pain you experience when you are sick could lead to muscle damage when combined with heavy drinking.

So in conclusion, if you are contemplating drinking while taking antibiotics for an infection, you still might want to think twice. While it is not as bad as everyone makes it seem, the alcohol can still have an effect on your health by prolonging your recovery and interfering with your body’s natural mechanisms for healing.