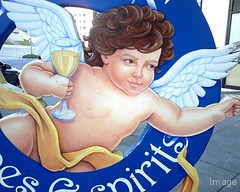 by MikeLove under CC BY

The phenomenon known as a fatal alcohol syndrome (FAS) represents a series of potential physical and mental problems that can present in a fetus as a result of maternal use of alcohol during the course of a pregnancy. Alcohol has the ability to cross the placenta and thereby cause low fetal growth rates, low fetal weight, harm to the brain and central nervous system as well as eventual behavior and psychological problems. Some lasting effects of FAS can include poor memory, cognitive disability, lack of impulse control and other unfortunate manifestations.

It is thought that FAS is the most prevalent reason for cases of mental retardation in western countries, with an occurrence rate of roughly 0.2-2 instances for every 1000 births. The costs of care over an entire lifetime for a child born with fetal alcohol syndrome are quite high, with estimates climbing upwards toward the $800,000 mark. Sadly, roughly 10-15 percent of pregnant women surveyed reported drinking alcohol recently, with somewhere around 30 percent reportedly having done so at one point or another during their pregnancies.

There are certain facial characteristics that are typical to those born with FAS, many of which are also indicators of the possible existence of brain damage. These facial traits are thought to be the result of damage done during weeks 10 and 20 of a pregnancy. The primary characteristics include the presence of a smooth philtrum, which is the area between the upper lip and nose which is typically marked by a grooved surface.

A thinner upper lip is also a trait displayed by those suffering from FAS. Finally, narrower width of the eyes is known to result from prenatal exposure to alcohol. The presence of all three of these features indicates a severe case, two of these features tends to suggest a moderate case, while the existence of just one is likely representative of a more mild case.

While there is no true cure for FAS and the permanent damage that results, there are treatments that may ameliorate the impact. Given the wide range of symptoms and effects among those dealing with the condition, an individualized approach to treatment is always appropriate. It is not uncommon for medical interventions, including the use of psychoactive drug agents to be utilized with patients dealing with FAS, since it tends to mimic the symptoms of other types of disorders.

Behavioral interventions similar to those utilized with those diagnosed with ADHD, Oppositional Defiance Disorder and Reactive Attachment Disorder are often attempted with such patients as well, though their success is difficult to predict and far from certain.

Given the extremely detrimental impact of FAS on those born with it, prevention ought to be a high priority for every single pregnant woman. Fortunately, there is a surefire way to prevent occurrences of this affliction and that is simple abstinence from alcohol during gestation. Awareness campaigns and education are essential to ensuring that fewer and fewer children are forced to deal with this difficult condition.